Splitting Aces In Blackjack - When And How To Split Aces 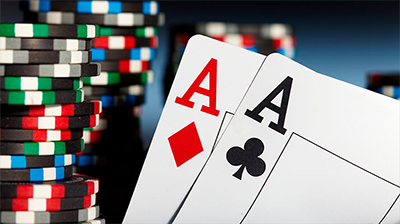 Online blackjack dealers won't allow you to hit after you split ace. This is because you could get another ace and then split again, which with further decrease the houses edge. Knowing when it’s a good idea to split aces can be the difference between winning and losing in the round. Blackjack is a game of chance therefore splitting aces does not guarantee a win, but it is still a good strategy to utilize.

Can I Split Aces?

Yes. Splitting aces is available at online blackjack operators and is a common strategy used by players. You are allowed to split aces anytime you are dealt aces as your first two cards. This is the only time when splitting aces is possible and you will not get a chance to split aces again in the round if you hit or stay first. It is best to go based on the dealers' exposed card whether or not you should split aces.

When Should I Split Aces? 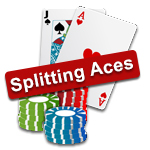 The best time to split aces is when the dealer has a weak exposed card. Whenever a player splits an ace they only get one card for each ace. The average winning hand is 18.5%, therefore there is no guarantee that you will beat the dealer if you split aces. If the dealer's exposed card is low, then you have a better chance and that is when splitting aces makes the most strategical sense.

How Many Times Can I Split Aces?

Some blackjack operators only allow players to split aces one time. Some allow splitting up to six times and others allow infinite splits. Most, however, will only allow one split as that will then net the player two hands out of one, increasing their winning percentage and lowering the dealer's edge. It all depends on the online casino operator the number of times you can split aces in a single round.

Will I Get Paid Odds If I Hit Blackjack When Splitting Aces?

Yes. The point of splitting aces is because getting two aces either nets the player a value of two or 12. This is a rough situation to be in therefore players split aces for a chance to hit blackjack. Hitting blackjack on splitting aces nets the same payout on the initial bet that was placed at the start of the round. Legal blackjack is a game of chance however so the odds of losing are still very much in play.